"The Compact Bullpup Rifle was created by the Tricorne Co. in 1990. The CBR-C is a variant of the CBR sold exclusively in Canada; It's shortened barrel allows it to comply with Canada's rifle laws. The quick fire rate and high accuracy make it a favorite for operatives in mid to long distance firefights. The 7.8mm rounds slice armor, but the fire rate and small magazine means frequent reloads."
― Ingame Description

The CBR-C is the ideal choice for ranged combat, and it maintains an acceptable length thanks to the bullpup design and shortened barrel. Its rounds are more than capable of going through most walls and dealing with targets efficiently.

The CBR-C is often used by SWAT with a laser and default mini sight. However, those found in the armory in The SCRS will not have a laser.

If you're in the market for a powerful rifle that can hold its own at long range, look no further. The CBR-C is a battle-proven weapon that is guaranteed to fit your needs. With high damage, solid accuracy, and rifle-grade penetration enemies won't be safe behind wood or drywall. The CBR also has great handling, and it can still land shots accurately even when fired at full speed.

The most obvious drawback of the CBR-C, however, is its ammunition. With a magazine size of only 10 rounds and a base reserve of 60, the slow reloads will be frequent and pickups will be required during long missions. Preserving ammunition requires a high degree of precision. If the player doesn't have enough damage perks it can take two headshots to kill enemies.

Even with the limited ammunition in mind, the CBR-C is still a fantastic method for dealing with distant targets, and it is quite effective against enemy operatives in close-range assaults too. Pair it up with a good backup weapon and you'll find your odds of survival are much better during a loud mission.

Though the CBR-C is good enough to not need any improvements in accuracy,

Rifle Mastery can still come in handy in order to ensure every shot fired hits its intended mark no matter how far away the target is.

In addition, it is important to take full advantage of the CBR's damage and effective range. Multiple

Vital Targets perks will greatly extend the damage and one-shot kill range of the CBR, making every shot an efficient one even at a distance.

The CBR-C is the ideal weapon for long-range marksmanship, though it can hold its own up close with the right attachments as well. 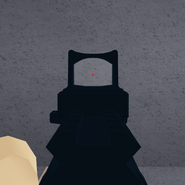 The default Mini Sight used on the CBR-C. 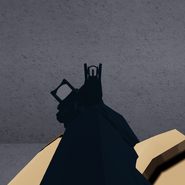 The Muzzle Brake.
Add a photo to this gallery
Weapons (Modifications)
Pistol
UP9 - K45 -