"The CH-A was designed by Cascade Technologies to be the civilian counterpart to their more popular CMS-5 model. Released in 2004, Cascade marketed the CH-A as a light frame sport and hunting rifle. The rifle was never popular in the European market, but it found success overseas in America. Operatives that prefer the CH-A generally choose it for it's light weight and high stopping power."
― Ingame Description

Though it has a very simple design, the CH-A isn't a weapon that should be underestimated. With a very long effective range and high power, it is easily able to pick off opponents from afar. In the hands of the SWAT, it can be a menace to an otherwise smooth operation, but the operatives can use it to turn the tables against their foes as well.

It is very unlikely to have the opportunity to replenish this weapon's ammo during a mission, but occasionally an extra rifle will fall off a rooftop. The CH-A used by the SWAT is fitted with an LS6X scope. On most difficulties, it is also fitted with a tactical laser.

With incredible range and impressive stopping power, the CH-A presents itself as the perfect answer to enemy snipers and grouped up enemies. At any range, it is capable of one-shot headshots, and perks can be used to sustain this useful trait on higher difficulties, allowing the sniper to quickly take out a foe before they can get a shot off. In addition, the CH-A also boasts an amazing amount of penetration, allowing it to punch through wood, drywall, and even concrete unimpeded. In the hands of a skilled marksman, it can also pierce armor without any difficulty.

For all its benefits, however, the CH-A does have some less desirable traits. The limited ammunition it carries cannot be replenished whatsoever, as enemy snipers are generally in positions the operative cannot reach. In addition, the CH-A is an unwieldy weapon up close and will quickly falter against large close-range assaults, especially if it is equipped with a scope. In stealth missions, it is often prone to overpenetration, hitting unintended targets behind the shooter's original point of aim.

While it's not easy to remedy the CH-A's faults in combat, there are plenty of ways to cover for them, such as equipping an able secondary or having an ally who can back you up at close range. The sniper is also best saved for opportunities that will best make use of its power, such as engaging enemy snipers, shield units, or operatives taking cover behind walls. When the CH-A is used to its strongest potential, it is truly a force to be reckoned with.

In order to make up for the CH-A's limited ammunition, it is essential to equip the

Sniper Mastery perk, allowing snipers to bypass shields and pierce through multiple targets. The ability to kill two or more SWAT with a single shot will come in handy during any mission. It is also recommended to pick up the Hidden Reserves perk to increase the amount of ammunition the CH-A will have, as it cannot be easily refilled.

Though weapon-specific perks generally aren't necessary to improve the CH-A, higher difficulties will open up greater challenges such as increased SWAT health, which may allow them to resist headshots at long range or survive getting shot through walls. Having enough

Vital Targets perks will ensure almost every headshot is lethal, and that even Aegis units won't be able to survive for long against the sniper's power.

Unless you intend to run the CH-A without any modifications, most setups will leave concealment out of the picture, meaning equipment bags will be needed to carry the weapon without drawing suspicion. Otherwise, using any of the scopes is a good way to take advantage of the CH-A's long range. Barrel and tactical attachments are a matter of personal preference. 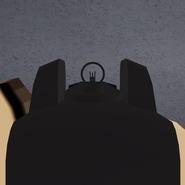 A CH-A sniper used by the SWAT. Notice how it has a scope, unlike the stock variant.
Add a photo to this gallery
Weapons (Modifications)
Pistol
UP9 - K45 -