Civilians are NPCs that roam around public areas and workspaces. There are many different civilians with various roles.

Normal Civilians wear random clothing and act as innocent bystanders. They do not enter any restricted areas and disappear when walking away from the mission area. These civilians spawn infinitely during stealth, except on missions where they aren't present, such as The Financer and the Scientist, or on missions that have a preset number of civilians, which are The Gala and The Auction. If a civilian hears gunfire, sees suspicious activity, notices a dangerous object, or is shot and flees the scene, they will call the police.

Regular civilians will not be suspicious of any disguise. 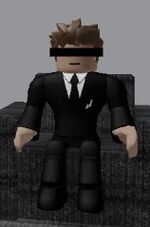 Employees are NPCs with black suits that roam the inside of buildings. They visit a set of areas and spend time sitting at desks. Some employees can be stationary and will sit at a single desk as long as they don't detect something. If an employee hears gunfire, sees suspicious activity, notices a dangerous object, or is shot and flees the scene, they will call the police. 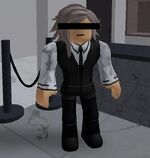 Staff are civilians who appear in The Night Heists. They roam set areas, but will not enter security rooms. The disguise is not detected by Security guards. 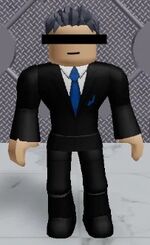 The Manager is a special civilian who can only be found in The Deposit and The Withdrawal. They wear a black suit with a blue tie and always have grey hair. There is only one of them in a mission and they are vital to mission completion. Managers will notice every disguise except the celebrity disguise.

The Auctioneer appears in The Auction. They wear a black suit with a blue tie. There is only one of them in a mission and they are vital to mission completion. They will notice every disguise. 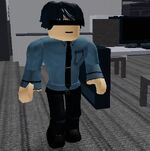 Techs are civilians in The SCRS that wear blue shirt and black pants, they can be seen on the back areas of the map, they will detect a player wearing their own disguise but ignore other disguises. One tech can be seen carrying a keycard.

There is a repurposed variant of the Tech seen in Black Dusk, now called the Workshop Tech. Two of them will have a vault keycard and can be interrogated for the code, or to identify the head Tech if not found already. They can detect all disguises, albeit at a slower rate than guards.

Analysts are civilians in The SCRS that wear grey uniforms and wander around the office areas. They will detect a player disguised as their own but will ignore other disguises.

There is a repurposed variant of the Analyst seen in Black Dusk, now called the Programmer. One of them will have a keycard for the server room, and they can be interrogated to pinpoint the lead Programmer if not found already. They can detect all disguises, albeit at a slower rate than guards.

Civilians walk around and stay some time at a desk or chair (in the case of employees). Some of these civilians do not move at all and will remain stationary for the whole mission unless they are lured elsewhere.

They will detect any suspicious activity like guards. If they catch suspicious activity, they will flee towards the nearest map exit and call the police, instantly triggering the alarm. If you leave them alone, the authorities will quickly be alerted. To stop an employee from escaping, you can shout at them to hostage them. Do this at your own risk, however, as nearby NPCs can hear the shout and will investigate.

There are minor differences between different civilians as regular civilians will not notice any broken glass, only the glass breaking, while employees will always notice broken glass. Some individuals, such as bank tellers, have access to panic buttons and will almost instantly raise the alarm when they get alerted. Some civilians can be interrogated to gain intel relating to the mission.