"What's that? Some criminals are robbing a bank exactly 60 seconds away from here? I've trained my whole life for this. Load the mags and toss in the flashbangs... and somebody go get my mask."
― The Enforcer's Gear Description

Halcyon has an extensive arsenal including operatives and helicopters, and the powerful Onyx unit. Most of their enemies are only encountered in Black Dusk.

The Halcyon Gunship can be encountered in The SCRS and is similar to the Steel Cove Gunship. It's an attack helicopter with a powerful turret and missile pods. When reaching 50% and 0% health it will shoot a missile each time, which will kill the player instantly if they are hit by it. It cannot be destroyed as it will retreat after its health reaches zero. Like the Steel Cove gunship it takes increased damage from explosives, 2500 instead of 300.

Halcyon Operatives are combatants equipped with a 480 MCS, CBR-C, F57, or S97. They are the most common Halcyon unit.

Juggernauts are special units similar to the Steel Cove Shredder unit. They come equipped with Aegis armor, a Sawblade, and an Aegis elite mask. On death, they will drop a first aid kit.

The Onyx Unit is a unique enemy encountered at the end of Black Dusk loud. They are stationary and come equipped with a powerful minigun which will quickly kill any player who goes near them. The weapon has a lot of spread, so engaging them from a distance is considerably safer.

Halcyon Operatives wear II-A Scout armor, which combined with their health make them tougher opponents overall. This also makes them highly vulnerable to sniper rifles. Juggernauts wear III-Aegis armor and have an equally high amount of health and protection when compared to Aegis Units.

The Onyx Unit has no armor and takes 95% reduced damage from explosives, but it has a lot of health. However, it takes the headshot multipliers from guns.

SWAT, TRU, and ETF are enemies encountered in multiple missions. They are special branches of law enforcement that the Freelancer fights throughout the story. Every SWAT/TRU/ETF except for snipers can throw flashbangs on Professional+. SWAT wears a black tactical uniform, black gloves, a balaclava, and a black helmet. TRU wear a green tactical uniform, gloves, a green armored vest, and a green helmet. ETF wear beige tactical clothing and a black cap, unlike SWAT, or TRU, the ETF spawns in immediately once the alarm sounds. These units are equipped with armor and generally don't go down as easily as police officers or guards.

Shield units are regular units that come equipped with a ballistic shield and a K45 on Operative and below, or an S97 on Elite and Legend. They only spawn on Professional and above and their spawn rate increases with the difficulty. The Ballistic shields are impenetrable, but you can shoot through the small window. The unit will raise their shield when attacking, but lower it when reloading or shooting from cover, with the exception of TRU units, who will not put down their shields at all. They can be flanked, taken out with explosives or shot with a sniper when you have the Sniper Mastery perk, as that will allow you to penetrate the shield.

Aegis units are special units that come equipped with a ballistic shield, an Aegis mask, an S97, and heavy armor. They have about four times the health of other SWAT and are a serious threat to players. Only one will spawn at a time, and only on certain waves. On Legend difficulty, they will spawn in pairs.

Snipers will spawn on rooftops or on raised locations in the distance. They are equipped with a CH-A which has a red laser and will shoot the player if they have a line of sight. On Legend they won't have a laser (except in The Financier), only a scope flash. ETF does not have snipers, so you're safe in The SCRS.

SWAT vans are armored trucks encountered in The Score. They have an automatic turret which will shoot rapid bursts of bullets, dealing immense damage. After the burst it stops for a few seconds to reload. The turret can be disabled by shooting the gun part of it. It will start smoking once it has been disabled.

SWAT wears II-A Scout armor, which provides a decent level of protection against most weapons but is especially vulnerable to the armor-piercing rounds of the CH-A.

TRU and ETF wear III-A Frontline armor, providing significantly more protection from damage. The caps worn by ETF originally protected them from headshot damage, but since an update on June 12, 2020 this is no longer the case.

Aegis Units, as their name suggests, wear III-Aegis armor, which provides a very high level of protection against everything and will even resist an explosive blast.

Police Officers used to spawn in The Killhouse and The Deposit too but were removed for an unknown reason.

Steel Cove is a paramilitary organization working for the US government and are encountered in multiple missions. They are more armed than SWAT and Police and do not have any defensive units like SWAT Shield units. Steel Cove units wear black tactical uniforms and gloves, and the soldiers wear black ballistic mandibles and light armor.

Steel Cove Shredders are special units similar to the Aegis Unit and the Halcyon Juggernaut. They come equipped with heavy armor, a Sawblade and an Aegis elite mask.

The Steel Cove Gunship is a unique enemy only encountered in The Lakehouse loud. It will spawn when you load the server bag(s) in the boat. It's an attack helicopter with a powerful turret which moves around the harbor and will shoot the player from far away. It has massive amounts of hp and is very difficult to kill, however it takes increased damage from explosives, 2500 instead of 300.

Steel Cove Shredders wear III-Aegis armor and have an equally high amount of health and protection when compared to Aegis Units.

Unlike Guards, SWAT and other enemies will charge or flank players, coming in squads and often breaching through locked doors in their way. If a door they come into has been unlocked, they will instead open the door, allowing the door to close afterward.

If a player enters a room without windows or with bulletproof windows, then 1-2 enemies will charge the player while others wait outside the room. Enemies that are too close to a player will retreat to the next cover available to them.

There are 3 stages of an Assault:

They cannot interact with the environment other than breaking doors, opening doors and freeing hostages.

SWAT Units, TRU Units and ETF Units are the few NPCs that can throw flashbang grenades at the player (Professional+ difficulty only). The flashbang will beep three times before exploding. If a player is near a flashbang, it will blind the player for 10 seconds. Shooting a flashbang will destroy it.

The difficulty increases how aggressive and accurate enemies are. They start to move around faster, have deadly reaction time and will switch between targets quicker. More squads will spawn and there is a higher chance for special units like shields or Aegis to spawn. 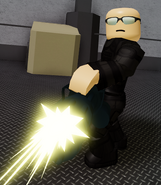 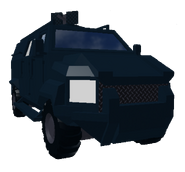 SWAT Van
Add a photo to this gallery