"United Defense created the F57 in 2004 as a military grade weapon, and since its introduction it's found its way into services in 14 different countries. Lucky for us, United Defense has never had an issue with under the table deals, and we get our supply directly. Operatives love the F57 for its power and high modularity. It can be modified to fit almost any role in a mission."
― Ingame Description

The F57 is one of the more costly weapons on the market, but its modularity allows it to be effective in virtually any mission. As a fully-automatic assault rifle, it is certainly not a weapon to be underestimated in combat either, and it can tackle any kind of target, whether they're close, far away, or behind cover.

The F57 shares its ammunition with the Sawblade, and it is commonly seen in the hands of the SWAT and Steel Cove with a full stock equipped.

The F57 is arguably one of, if not the best weapon in the game. Whether it's being used against SWAT teams or enemy operatives, the F57 is always capable of pulling its weight in any mission. As its fully-automatic fire-rate is backed up by its long range, rifle-grade penetration, and great damage, it can handle any task fearlessly. It is also benefited by a wide variety of attachments and modifications which can improve the weapon's combat potential or make it easier to hide from plain view. The insane amount of reserve ammunition is another advantage to using the F57, and with 150 spare rounds available at base it'll be a long while before any operative runs dry.

However, the most primary concern when using the F57 is its accuracy and stability. Despite its high effective range, it is not nearly as suited to long-range tasks as the CBR-C is. Even with Rifle Mastery, fully-automatic fire can prove to be a liability at a distance as the spread and recoil drastically reduces the chances of hitting the target. Of course, the F57 is certainly useful for any task regardless of its faults, but as the old saying goes, a jack of all trades is generally a master of none.

Despite the F57's drawbacks, though, the rifle still carries a litany of benefits, and most operatives will readily praise its ability to be used to deal with any kind of problem, as well as the healthy ammo count which allows a secondary weapon to be skipped or simply picked up from enemies.

Most of the F57's playstyles will involve some form of medium-long range usage, and making use of the

Rifle Training perks will be very helpful as they will increase the weapon's overall accuracy and extend its one-shot kill range.

Unlike other weapons, however, the F57 will benefit greatly from any mixture of combat perks, and the combination depends on the specific playstyle of the player. Having extra concealment, faster reloading speed, more ammunition, or the ability to use the weapon while sprinting are all perfectly good perks to have on the weapon, leaving the player's decision entirely up to their playstyle and personal preference.

The F57 has the largest amount of customization available, with options for stealth and direct combat. It can be used in virtually any situation imaginable, provided the player has the right set of perks to support it, and there are many possibilities for a useful build. 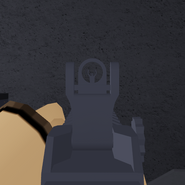 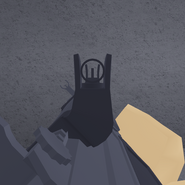 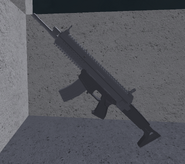 An F57 with a Full Stock, utilized by SWAT.
Add a photo to this gallery
Weapons (Modifications)
Pistol
UP9 - K45 -