Guards are a type of NPC that spawn in missions. They patrol most of the mission and will detect any suspicious player or object. Guards provide disguises and often hinder the completion of objectives during stealth, so taking them down is essential for a successful mission.

Guards follow similar behavior patterns as other NPCs. Most have a fixed route, but some might differ depending on the situation. If you spot a guard a red marker will show at their location.

Guards patrol the map and will stop at certain patrol points for some time. The patrol point they walk to is random, but they will visit each point eventually. Guards can deviate from their standard patrol routes when they detect something or a camera detects something. They will always take the shortest path available which can change if the player opens up specific doors. Guards themselves can only use unlocked doors, they can not go through keycard or locked doors.

Some guards will have a specific spot and will not move for the entirety of the mission until taken out or lured away. They generally are guarding doors that lead into important rooms such as the manager's room in The Deposit, or the vault in The Withdrawal.

During loud they will turn hostile, crouch at their current position and shoot any player they see. In most missions they despawn shortly after loud initiates.

Guards use radios to call in suspicious behavior and raise the alarm. It takes a few seconds for them to call in and if the call goes through the alarm will sound and loud will initiate. A red radio symbol will show if they are currently calling in.

A grey radio symbol will show if they are currently on the radio. This state makes them more suspicious of players, giving them a higher rate of detection. If you knock them out or hostage them during this period the radio will turn red and start flashing, indicating a response is needed. This can also happen if you take them out while they are trying to raise the alarm.

To avoid failing stealth you have to answer the radio call by interacting with the guard/body and while doing so you are suspicious. If you cancel the interaction the alarms will go off. You cannot move the guard or bag the body during this state and are forced to interact with the radio. If nobody answers the radio then a couple of seconds later the radio operator will get suspicious and raise the alarm themselves.

A player without perks can only answer 1 radio per mission. Trying for more will result in the alarm going off upon finishing the call.

Guards notice anything suspicious and there are various ways to get detected. If the guard notices something they will start walking towards it and have a grey radio on higher difficulties. If the player has a red status guards will detect them faster.

When a guard's suspicion meter reaches certain points they will deviate from their standard behavior:

Besides detecting the player, guards can also get alerted by various suspicious objects such as forced open doors, bags, broken glass, or bodies. They will usually walk up to the object before raising the alarm, giving you time to react. If they find any weapons or equipment they will pick it up. If guards find too many weapons or equipment they will raise the alarm.

Security Guards wear a white shirt with a vest and grey pants. They are standard security personnel and do not have any special behavior. They are armed with a K45. They can be encountered in The Setup, The Freelancer, The Deposit, The Withdrawal and The Killhouse.

Police Officers wear a standard police uniform. They are armed with a K45 and have the same behaviour as security guards. They can only be encountered in The Freelancer and The Lockup.

An enemy variant called "First Responder" can be encountered in The Freelancer and The Withdrawal loud, but they are always hostile to the player. They can be armed with a 480 MCS or K45. 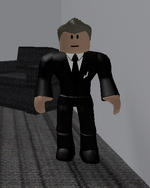 Bodyguards wear black suits and guard Ryan Ross in The Financier. These guards are different from regular guards as they stay at a patrol point much longer and their detection rate is much faster. On higher difficulties, Ryan will have a personal bodyguard who can detect players much faster than other guards. The patrolling guards are equipped with K45s, while the guard escorting Ryan is using a Raven on higher difficulties. 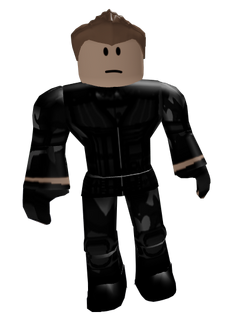 Steel Cove guards can only be encountered in The Blacksite. They wear black tactical uniforms and their behaviour is the same as security guards. There is a special variant of this guard called "SC Commander" who wears a black beret and is required for mission completion during stealth. Steel cove guards are armed with an S97.

Phoenix Operatives are only encountered in The Lakehouse and they wear either a military vest or black tactical clothing. They also wear the Classic shades. Phoenix operatives are all armed with S97s with the exception of the camera operator who has a K45.

Phoenix Operatives cannot be intimidated. An exception to this is the camera operator, who can be taken hostage. If you knock out a Phoenix Operative their radio will go off and you will have to answer it. This can be disabled by taking out the Head of Security during the mission. 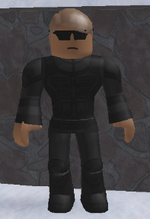 Halcyon Operatives wear Halcyon clothing and are encountered in The Scientist. Similar to Phoenix Operatives, they cannot be intimidated. They sometimes talk to each other on the radio, causing them to have a gray radio. Halcyon Operatives are armed with a S97. 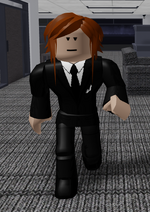 Security is only encountered in The SCRS. They wear black suits and patrol the back areas of the map. They can open any chip reader and will occasionally go through closed off places. They are armed with an S97.

Their hostaging range is much lower compared to regular guards, and if the player leaves them alone for a few seconds they will immediately run away. Taking out any security will initiate a timer after which they notice the missing security. You can avoid this by taking out the control room. 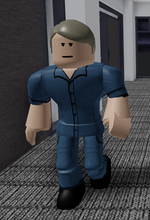 Janitors are hidden guards found in The SCRS. They wear a blue jumpsuit and patrol the front areas of the map, likely there to fool trespassers. They can open some of the chip doors leading to the weapon scanners but are not allowed access to the deeper parts of the site. They are armed with a K45. 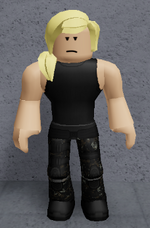 Base Security are halcyon security guards encountered in Black Dusk. They do not have radios and are armed with a 480 MCS or S97. There is a lone Security waiting for the player upon their arrival during stealth who will talk to them and escort them to the upper shooting range, where they tell them to wait for the research coordinator.

Elite Operatives look identical to Halcyon Operatives and are encountered in Black Dusk. They detect all disguises at a faster rate and their disguise opens all chip readers. One Elite Operative visits the upper shooting range as the research coordinator. They only come is the security escort finishes their dialogue.

Detectives spawn in The Lockup. They wear casual clothing and behave the same as security guards. Their disguise can not be equipped. They are armed with a K45.

Camera Operators are special variants of guards that operate the cameras found in missions. They are stationary and will not move, but they can still detect suspicious behavior in front of them.

If a camera detects an operative or suspicious activity they will get alerted and immediately attempt to raise the alarm. You can take out the camera operator to deactivate the cameras they were currently operating. A mission may have more than one or even possibly no camera operators.