"The K45 is a solid, reliable weapon that's been a staple of police and civilian arsenals since its release in 1945. The strong .45 semi-auto remains one of Seigel Arms' most popular models. It may not be as flashy or as big as some of the other options out there, but it's reputation and dependability have earned it a place in the armories of many operators."
― Ingame Description

A venerable, time-tested design, the K45 is the choice of professionals. It may not be free and you may need to reload frequently, but its stopping power and handling traits make it an excellent backup that takes care of business even at long distances.

The K45 shares its ammunition with the MM20. Guards, shield SWAT (below Elite difficulty), and police officers use this as their pistol of choice.

If you're looking for the ideal combat pistol or the perfect backup weapon, it's worth considering the K45 for your arsenal. The .45 ACP rounds grant it greater stopping power and accuracy than the standard variety. In addition, it comes with some fast handling traits and a longer range than the other pistols on offer, allowing it to tackle distant targets such as snipers.

Of course, it's always important to consider the disadvantages of bringing a pistol to the field, and the K45's main concerns are its magazine size and recoil. Expect reloads to be frequent with this weapon, as eight rounds can be spent very quickly. In addition, the recoil is fairly strong, and firing rapidly is an easy way to miss shots even at a close range. Hipfire isn't this weapon's strong suit either, meaning aiming down the sights is essential at range.

Fortunately, the negative traits of this pistol can be remedied with plenty of skill and practice, and its advantages make it a secondary that can perform just as well as a similarly priced weapon in most situations. If you need something that'll keep your back safe during a heist, the K45 should be your weapon of choice.

Operatives looking to get the most out of the K45 should capitalize on its best statistics, namely its reload speed, reserve ammunition, and increased damage. Be sure to take

Vital Targets, and other similar perks in order to make each of the pistol's eight shots count and make reloading a non-issue when the situation gets hot. While

Pistol Mastery is an option, the dual wield is risky. You lose a lot of reliable range to tackle individual targets and consume ammo more quickly, but the sheer DPS can be rewarding in alot of situations.

Running out of ammunition can be an issue with the K45, so it never hurts to have

Deep Pockets around in order to ensure you always have something to fall back to when your primary weapon starts to run dry. It'll also give you plenty of room to use weapons that have limited ammunition as well.

The K45 is capable of accepting the standard variety of barrel attachments as well as the laser, filling the bare necessities for a backup weapon. True operators don't need custom sights to be effective with this pistol. 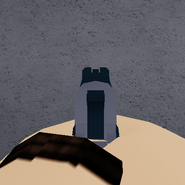 The K45's Base Stats.
Add a photo to this gallery
Weapons (Modifications)
Pistol
UP9 - K45 -