"The MM20 was designed and developed in 2005 for the use of Chinese SOF. It's difficult to obtain in North America, but luckily for us the Armera is able to supply them. The compact gun features a three round burst with strong recoil compensation, designed for taking down targets at medium ranges. Operators like the MM20 for it's accuracy, stopping power, and it's concealability."
― Ingame Description

5
The MM20 is an exclusive weapon that requires the Expanded Arsenal gamepass to be purchased. It costs $33,000 to buy and $350 to deploy on a mission.

This powerful, compact addition to the arsenal allows dangerous foes to be tackled more easily at close to medium ranges without sacrificing other key traits of the weapon. With the help of burst fire and the unique recoil reduction system, enemy operatives and SWAT will be no match for this SMG.

No enemies currently in the game use the MM20, meaning the only way to replenish this weapon's ammunition is by picking it up from the K45 pistols a few of them use.

The MM20 is perhaps one of the most effective weapons an operative can get their hands on, and it holds many advantages over other guns. When properly equipped for combat, this SMG is capable of outperforming even rifles thanks to its extended range and impressive damage, and with the enhanced recoil compensation, it has no problem taking care of any enemy that stands between the operative and a successful mission.

As far as drawbacks are concerned, the MM20 only has a couple of minor problems that don't impact its overall performance. It has just enough penetration to shoot through wood effectively, though it can't pierce through walls in the same way a rifle can. In addition, ammunition can potentially be a critical issue as .45 ACP weapons are not used by Steel Cove or SWAT in higher difficulties, and perks will be required to preserve its effectiveness throughout each mission.

In short, the MM20 can prove to be a truly destructive force in anyone's hands. Despite being classified as an SMG, it performs like a pistol-sized rifle while still maintaining the insane close-range performance of its class. When you've got an enemy that challenges your superiority, one burst is all you need.

Some of the MM20's strongest traits include damage and handling, and focusing on these will maximize your ability to work wonders against the constant waves of enemies. Combining SMG Mastery with

Steady Aim and a large amount of damage perks will allow you to remain dangerous even while on the move, and enemies will be easily defeated no matter the difficulty. Additionally, obtaining a damage bonus of at least 120% will allow you to one shot S.W.A.T units on Legend difficulty, making it extremely powerful.

The MM20's ammunition is unlikely to be replenished easily, if ever, and its base reserve of 90 rounds must be bolstered through

Deep Pockets perks. The substantial increase in ammo will help you to remain dominant even during longer missions.

The MM20 comes with a substantial amount of customization options which allow it to excel in its close-medium range role. There are many options available to make the recoil even lower, with the grips elevating this SMG to a very competitive level. It can also be used for stealth if desired, and with enough concealment bonuses, even a highly customized MM20 can be kept out of sight. Every shot fired by the MM20 is considered a first shot, making the ergo and angled grips significantly more effective. 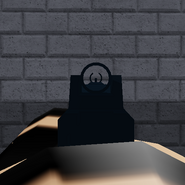 A fully customized MM20 with a stock and various attachments.

The main view for the MM20 in Shadow War and the testing range.
Add a photo to this gallery
Weapons (Modifications)
Pistol
UP9 - K45 -