A Player's Status displays the player's physical state of appearance at the bottom left of the screen. The status indicates what state an operative is in, with the state deciding how guards and other NPCs will react to them.

In most maps by default, a player does not have a state, meaning that no one will react to them. As the state changes, words indicating such states will appear, changing color and text according to the situation. Acting according to status and changing status is key to successful stealth runs in Entry Point.

The Art of the Steal, 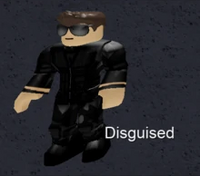 These states are characterized as appearing in white or grey text, with civilians tending to completely ignore them. Guards and other NPCs will pay little attention to you and/or will notice you very slowly. The Hidden States are vulnerable to exposed states, and a disguise won't save the player from suspicion.

The normal status displays no status at the bottom left. This status occurs when you are not disguised, not doing anything suspicious and are not in a restricted area. It has no advantages besides not getting detected by any NPCs, allowing for you to roam freely anywhere in the map that would not classify you as Trespassing.

Trespassing will be displayed if the player enters a restricted area. NPC's will detect you and if they reach one third of the detection meter a countdown of 7 seconds will begin. If you do not leave the restricted area in those seven seconds then the NPC will get alerted, otherwise the timer would disappear. Taking out all the NPC's which saw you trespass will also remove the timer. However, if you initiate the timer three times, you will be given a final warning in red. Trespassing an extra time or trespassing with a bag will not initiate a countdown, instead, you will be detected as Red Trespassing and NPCs will be alerted by your presence.

Conspicuous will be displayed if the player is disguised but is doing something out of the ordinary, such as running, crawling, or carrying bags. Some disguises will allow you to carry bags without being marked conspicuous. This status is identical to the Disguised status, except that NPC's will detect you faster. 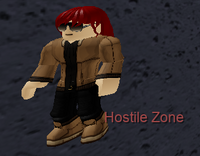 These states are denoted in red, and mean that NPCs are fully aware of the player. Any player in their sight will be quickly spotted, even with a disguise.

If any illegal activity is performed then the player will be suspicious. While suspicious, NPCs will detect you at a faster rate. Certain disguises allow you to perform actions without being suspicious.

When a player aims down sights with a weapon they will be Intimidating. Any NPC that can be hostaged and close enough to the player will be intimidated and turn into a hostage. The intimidation range depends on the difficulty, type of NPC being intimidated, and can be increased by perks. Certain NPCs can not be intimidated at all.

Being in a Hostile Zone means getting detected by every NPC in the area who is aware of your presence, regardless of disguise. NPCs such as guards tend to patrol these areas and will shoot once full detection is reached.

Red Trespassing is functionally the same as the hostile zone as you will be detected by every NPC. These are usually found beyond regular trespassing zones. Unlike normal Trespassing, countdowns do not initiate here, instead you will just get detected.

After initiating loud your status will change to Compromised, after which it will remain as that until the end of the mission.

NPCs in this state can be identified by their neutral expression. They won't pay any attention to the player and will follow their default behavior.

If the detection meter goes above 33%, the NPC will turn towards you and stay in place for a short while.

If an NPC sees something suspicious they will go to it to investigate as indicated by the question mark above their head. On higher difficulties, guards will check in on a grey radio.

If an NPC is intimidated they will turn into a hostage. They will raise their arms and drop any guns and equipment they had on them. In this state they can be moved, laid down, interrogated, knocked out, or shot at.

NPCs in this state will attempt to run away. This state can be triggered if an NPC is alerted, a hostage is left unattended or the alarms are raised.

A brief phase, triggered once NPCs realize something is wrong, where NPCs will stand still in shock for a few seconds before going into a Fleeing state or Combat state. NPCs that use radios will also have a radio you will be forced to answer. If guards get alerted because of the player they will start shooting after a brief moment. During this short amount of time, you still have the time to shoot/knock out the guard without having the gunshots be heard by nearby NPCs. In Black Dusk, Base security and Elite operatives will shoot the player and run to the nearest panic button to raise the alarm.

After the alarm is raised guards will enter combat mode in which the crouch down at their current location and shoot at any player they see.

Pacified NPCs are NPCs that have been killed, intimidated, or knocked out. Unconscious or dead NPCs can be picked up with a body bag to move them somewhere else. If they were knocked out, their disguise can be equipped, unless they are a regular civilian or special NPCs. You cannot, however, get a disguise from an NPC when you didn't bag him/her before the alarm has sounded.