"Created in 1997, the S97 is a small frame 9mm submachine gun. Seigel Arms Company stopped manufacturing the weapon in 2012, but it's still fairly easy to obtain. The integrated folding grip and stock turn it into a very low profile weapon. While the 9mm caliber isn't effective at cutting armor, but the weapon remains popular with operators due to it's high rate of fire and high concealability."
― Ingame Description

Thanks to its features, the S97 is easily concealable by design, and it's a great way to send a hail of bullets from seemingly nowhere. Though it is weak, it is certainly more than a match for other weapons at close range.

The S97 shares the same rounds as the UP9, and it is the SMG of choice for both SWAT and Steel Cove.

The S97 may not look like much at first glance, but as a PDW it is designed to be lightweight and compact while still delivering the firepower of a full-size SMG. It is capable of dishing out rounds quickly, which can be helpful for light suppression, and it is an adequate weapon in close quarters, controllable enough to be fired in short bursts or even fully automatic. It can be easily concealed as well, even when completely customized.

The primary drawback of the S97, however, is its weak power and poor accuracy. Outside of close range, this becomes glaringly obvious as it will miss distant targets frequently and deal less than ideal damage if it does manage to hit. In addition, the high fire rate of the S97 will cause it to burn through rounds quickly, burning through the player's limited supply of ammunition and making ammo pickups a necessity.

As long as the player keeps these shortcomings in mind, though, the S97 will please them when it is needed. It is a formidable weapon in close quarters and it is far more suited to spraying from the hip than any other weapon. Just be sure to bring a rifle along as well.

Naturally, an excellent way to start off strong is to get the

SMG Mastery perk as well as the

SMG Training perks behind it, as they will grant the S97 some additional power and allow it to equip a suppressor plus a little extra while still being concealed, making it perfect for stealth heists or hostage situations.

Another perk that will come in handy is

Steady Aim, and while it is quite far off, the S97 is well suited to hipfire. The ability to fire your weapon while strafing or closing near your target can work towards your favour in many situations.

While running a plain S97 is perfectly fine in most cases, there are plenty of mods available to enhance the weapon's effectiveness while still keeping it hidden from plain view. There are also scopes available, but without canted sights, they often end up being a detriment to a weapon designed specifically for close range. Choose carefully to find the best setup for your own playstyle. 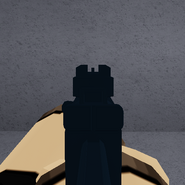 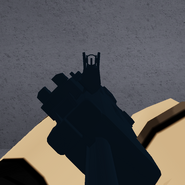 The S97's Canted Sights.
Add a photo to this gallery
Weapons (Modifications)
Pistol
UP9 - K45 -