"The "Sawblade" is a heavily modified LMG variant that comes directly from the Armera. Armera Custom weapons are infamous in the world of operatives, and the few with connections to get them gladly pay the high prices. The Sawblade in particular boast a hundred round magazine, high stopping power, and no tolerance for that "Stealth" nonsense. When you buy a gun like this, you use it."
― Ingame Description

Sometimes, the best way to hold down a defensive point is to have more bullets than the enemy, and the Sawblade takes this role seriously. With a hundred-round magazine on tap, operatives can throw precision out the window in favor of endless bullet rain and the stopping power of an AR.

The Sawblade shares the same ammunition as the F57, and it is the weapon of choice for Shredders and Juggernauts.

The Sawblade is the perfect weapon to use when the mission calls for excessive force. When large groups of SWAT close in on the bank or enemy operatives are attempting to make their entry, ten seconds of endless fire from this LMG will kill anyone foolish to step inside or encourage them to find a less dangerous entrance. The insane magazine capacity of this weapon isn't something to mess around with, especially since each round carries the same power as an assault rifle.

With high capacity comes a high amount of drawbacks, however, and the Sawblade's issue is its cost. The purchase price is incredibly steep, and regularly using it on missions will make profit unlikely. Those rich enough to purchase the weapon will be hindered by its poor mobility and handling traits, namely the slow walkspeed and very long reloading time once the magazine runs dry.

Once the weaknesses of the Sawblade are addressed with the ideal perk setup, it becomes a very fun weapon to bring along on loud missions, as the overwhelming power will put a stop to even the thickest of SWAT forces. Once you've spent enough time in the world of heists and assaults, you'll learn there are very few things that can stand up to a gun with a hundred-round magazine.

The first thing that needs to be addressed is the Sawblade's movement speed, as moving slowly can be a serious problem when reaching objectives or evading enemy fire. Getting

Heavy Weapons Mastery will halve the walkspeed penalty of the LMG, making it easier to get around.

Quick Swap, speeding up the reload speed of the weapon. Without this, you will be extremely vulnerable to enemy fire when you inevitably run out of ammo.

The Sawblade really isn't in need of attachments, but better accuracy and better ways to improve the weapon's spread over range will make unloading on enemies more satisfying. Just be wary of the iron sights blocking your gun's view. By default, the Sawblade is equipped with a bipod, which reduces a significant portion of spread and recoil while prone. 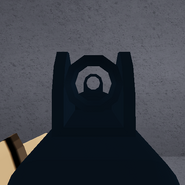 The Sawblade's Iron Sights.
Add a photo to this gallery
Weapons (Modifications)
Pistol
UP9 - K45 -