"The Thumper is a 40mm, single shot, break action grenade launcher. Created by the Americans, it first saw use in the Vietnam War, and remains in use to this day. It's name comes from the distinctive sound it makes when firing. The launcher is simple but reliable, and operatives pick up the Thumper for it's portability and destructive potential. It can be used in combat, or as a versatile breaching tool. Just make sure to keep it away from Rose."
― Ingame Description

This single-shot launcher is a great way to bring explosive power to any mission. It can be used to deal with large groups of enemies or it can open a variety of doors with extreme force, depending on what the mission calls for. Most people might call the Thumper overkill, but others simply can't say no to more explosions.

The Thumper can only be used during missions, and it cannot equip any attachments whatsoever.

Do you like explosions, but prefer to blow up things immediately and from a distance? The Thumper should be your weapon of choice. The powerful grenades it carries can be used to destructive effect, dispersing vehicles and assault units with extreme prejudice and smashing doors open. It can't blow open vaults, but highly reinforced panic room doors are no match for the launcher, requiring only a few grenades to blow open.

Outside of breaching, the Thumper's reliability can take a nosedive on higher difficulties. SWAT forces are often not killed outside of direct hits, and the parabolic trajectory of the grenade requires lots of practice to master at a distance. In addition, the launcher reloads quite slowly, exposing the user to any enemies that are still standing after the blast.

With the proper equipment and perk setup, players should be not dissuaded from using the Thumper if they feel they'll be able to benefit from explosions. It can put a quick end to big problems, and it can definitely speed up certain missions when they get loud. Just be careful when having it in your hands, since pulling the trigger while you're unaware blows you up, and you'll die instantly.

There aren't many perks that will add much to the Thumper, but there can be a couple that stand out. Improving the damage of the launcher with

Vital Targets will enhance explosive power, increasing the lethal radius of the weapon.

Deep Pockets are handy in granting a couple of extra shots.

Another perk that can come in handy is

Quick Swap, as the Thumper has a slow reload time and will likely expose the player to attack. It'll effectively allow the launcher to fire at a faster speed, making breaching a breeze. 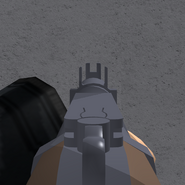 The Thumper's Iron Sights.
Add a photo to this gallery
Weapons (Modifications)
Pistol
UP9 - K45 -