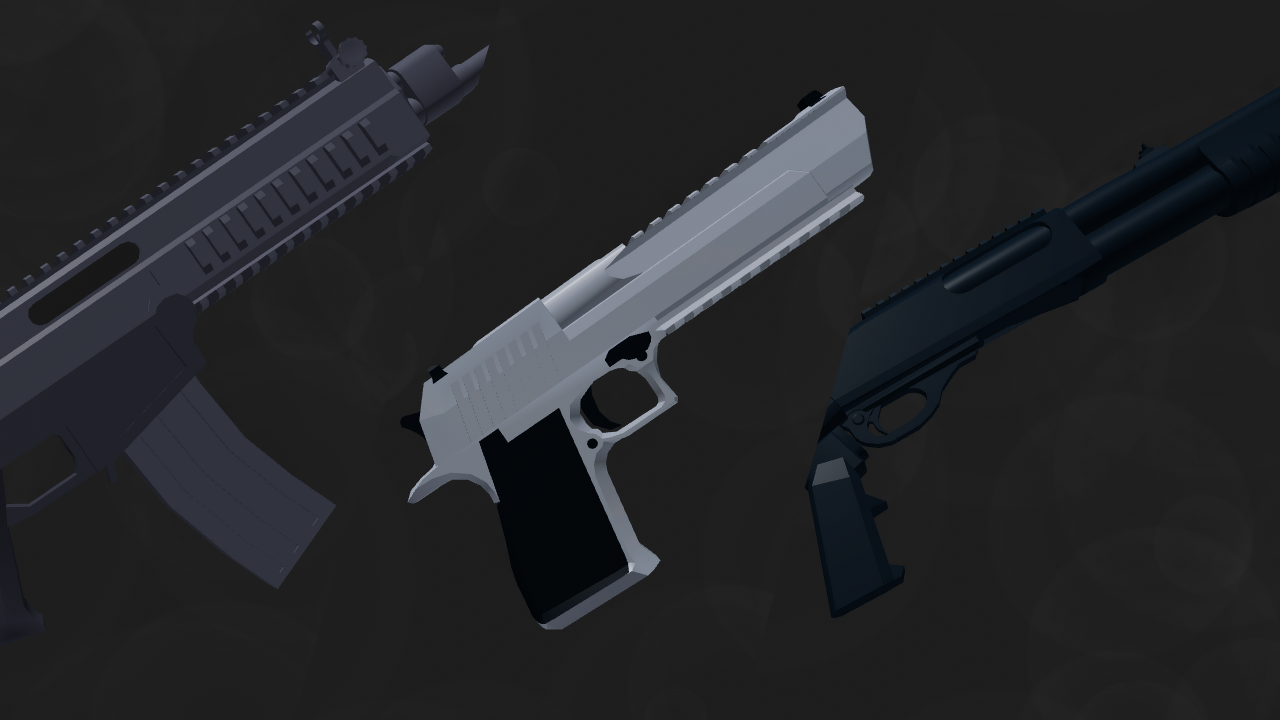 Weapons are used by operatives and enemies alike throughout missions and other gamemodes.

Entry Point currently features 6 types of firearms, with 11 guns in total. Most of them can be unlocked by simply purchasing them with money acquired throughout the course of the game, but a couple can only be unlocked through special events and gamepasses.

While some weapons are accurate portrayals of real life firearms, others are visual composites of other guns and don't have exact counterparts.

Melee is an alternate option that is mostly used during stealth. You must be holding a weapon to perform melee attacks by pressing "V". You can switch between the two modes by holding "V". The mode is indicated by a fist or a knife icon next to the health bar. The icon will flash with the other icon, and then fully turn to the other icon once you hold “V”. The knife is automatically equipped when a heist goes loud.

Having the Steady Aim perk will allow you to use melee attacks while sprinting with a mastered weapon.

A gun bash will silently knock out any NPC, leaving their disguise intact. Guards and civilians can be knocked out even after the alarm is raised, however it will not work on combatants.

Stabbing somebody will kill them and ruin their disguise. As opposed to bashing, knifing can damage combatants, killing normal NPCs in one stab and dealing 200 damage to assault units. However, it has a slow speed making it highly ineffective and leaving you open to damage, thus only viable in emergencies. Knifing is not recommended during stealth, as it will ruin your no-kill bonus & have less range than the gun bash, without any benefits. Knives cannot be used while dual wielding.

An effective backup weapon in a pinch, pistols are small, cheap, and very easy to hide. No other weapons are necessary when stealth is the goal. Having the Pistol Mastery perk allows you to dual wield when having two pistols of the same model and reload a single equipped pistol 25% faster.

Similar to pistols, submachine guns are small in size and relatively easy to conceal, but they have a higher rate of fire. Having the SMG Mastery perk reduces the concealment cost of all SMGs by 2 points.

Shotguns excel in short range combat and one well placed shot is usually all you need. They make up for their shorter range and fire rate with high damage. Having the Shotgun Mastery perk increases the intimidation range of all shotguns by 50%.

Not all enemies can be dealt with up close, but fortunately rifles have the range and power required to take on foes at any distance, without hesitation. Having the Rifle Mastery perk decreases the spread of all rifles by 40%.

There's no better way to shut down snipers than by giving them a taste of their own medicine. These rifles are slow yet powerful, and can even take on foes hiding behind thick cover. Having the Sniper Mastery perk allows all snipers to pierce through ballistic shields, enemies, and bulletproof glass.

Going loud might not be the safest way to heist, but it's definitely can be fun. These weapons are among the most expensive and sure to slow you down without external help, such as perks. Having the Heavy Weapons Mastery perk reduces the movement speed penalty of all heavy weapons by 50%.

Almost every gun has a variety of modifications and attachments available, ranging from optics and barrel additions to tactical and concealment options. There are many combinations available to suit the needs of each mission.

The Thumper is the only weapon that cannot equip modifications.